Posted on 25. Oktober 2015 by Falk Fatal under HOME, INTERVIEWS

Siberian Meat Grinder are one of the best-known russian punk and hardcore bands. Their sound is a wild crossover of punk, hardcore, rap and thrashmetal. A few weeks ago they released a new album and went on tour through europe. What they experienced on tour and what they think about the anonymus accusations a group made on linksunten.indymedia about them, you can read in the interview below.

First of all, please tell me the bandhistory of Siberian Meat Grinder. How did it all start? What was the reason to start the band?

The band was started in 2011 by a group of people from different corners of Russia – Siberia, Urals etc. We knew each other for years due our involvement in DIY scene and street culture. At some point of our lives we all moved to Moscow and decided to combine our experience and skills to create an act of supreme power. The idea was to bring together hardcore punk ,metal, hip-hop, graffiti, skateboarding and other stuff we love to create and develop our own style. As you can see today, it worked.

I guess playing concerts in Russia is a bit different playing shows in Germany, isn’t it?

Today there is not too much difference.  Of course, the Russian scene is much smaller because it is also much younger, but it keeps developing. And in recent years it changed a lot. Even a few years ago there were still many problems with Neo-Nazi attacks, police crackdowns etc. Almost every hardcore gig was like a battle, because it could be attacked any time and going to a show you never knew if you gonna get home in one piece. I remember travelling around Russia and CIS with my former bands and there were lots of adventures, including bloody brawls and nights behind bars. Now everything is much safer. But you still can expect some troubles from the police or Nazis, especially at more political gigs.

Last month you made a small europe tour. How did that go?

On “Siberian Stomp Tour – 2015” we played more than 20 gigs around Europe, including such festivals as Punk Rock Holiday, Free&Easy, Pod Parou, Monteparadiso, FFUD and others. The tour came out amazing, we got a lot of support, met lots of nice people and shared the stage with many great bands, such as 7Seconds, Misfits, Ratos De Porao, Get Dead, Wolfbrigade, MDC, Death By Stereo. What can be better than travelling around the world and playing music every night! You can get a taste of the great atmosphere of the tour from our little video report:

A few weeks ago Destiny Records and Dirty Six Records rereleased your first two EPs. When will you release a „real“ abum? Are there any plans for one?

We are fans of small formats and believe that it’s better to have 5 killer songs than 3 good and 10 average. So since the moment we start playing we recorded two EPs – „Hail To The Tsar“ and „Versus The World“  – both released on CD by our own label Siberian Metal Works. In 2015 after we got signed to Destiny Tourbooking we got an offer to release both mini-albums and some bonus-tracks as a longplay by Destiny Records and  Dirty Six Records – a young Berlin-based label. Both CD and LP versions came out great, of an outstanding quality and are distributed very well – we receive letters from people from all parts of the world, who say they got the album and liked it a lot. So we gonna take the opportunity to say THANK YOU to Destiny and Dirty Six for their work.

Anyway, we’re working on a longplay right now and already have some stuff recorded. A few months ago we released a music video for the song “Walking Tall” from an upcoming album – the video even has a short cameo from Vinnie Stigma of legendary Agnostic Front!

The music from SMG is a crossover of different styles like Thrashmetal, Hardcore, Punk and Hip Hop. Does this mixture represent your personal preferences? And was it clear from the beginning that your sound will be such a crossover?

Yes, that was the initial idea behind the creation of SMG. We love metal, hardcore-punk, hip-hop so we wanted to mix everything together using our own unique recipe and create our own original style. The more we play, the more we experiment with our style, but our main purpose remains the same – to produce the pure energy in a form of music.

SMG uses Graffitis for artworks and Merchandise, and your videos look very professionell and creative. How important is style for SMG?

For SMG style is everything. Some of us are coming from the graffiti background, we were and still are members of graffiti crews, so we started to use our skills for the development of our band since day one. Some of our merch and cover art is created by ourselves, some by our friends – various graffiti artists and illustrators from Russia, Belarus etc. Videos are also a big part of our band’s style. We grew up watching classic skateboarding and graffiti flicks such as Zero „Misled Youth“, Toy Machine „Jump Off A Building“, „Dirty Hands“ as well as movies from such collectives as Kourtrajme, so we started to make our own videos dedicated to our lifestyle and street culture.

I don’t know if you heard about it. A while ago a group called Antifascist Subculture Worldwide blamed your band (and What we Feel and Moscow Death brigade) for a wrong antifascism on indymedia, they accused you for being patriotic and sexist. Do you have any idea why they would say that about SMG? What would be your your answer to this group?

Yes, we heard about it and read the article. There was a reply from MDB and WWF (in English, German and Russian), posted on Indymedia and other websites, and a  few open discussions (including one in Berlin’s Kopi – one of the oldest European squats) to which the authors of the criticism were invited by the organizers, but ended up never showin up.   The „critical“ article seems to be just a compilation of groundless accusations, which look absolutely ridiculous to anyone who knows about MDB, WWF and their activities, including Antifascist resistance and numerous benefit actions  in support of the victims of Neo-Nazi violence. We have no idea why SMG was mentioned there – probably because we share some members (and ex-members) with MDB and WWF. All of us stand strictly  against all forms of fascism and discrimination and some were involved for years in a real struggle against Nazi thugs – on the streets, not in front of the monitors. The attempt to anonymously attack both bands completely failed: MDB and WWF received a lot of support from people and collectives around the world and played very successful tours soon after the publication of that “criticism”.

The reply of MDB and WWF can be found here: https://linksunten.indymedia.org/node/135332 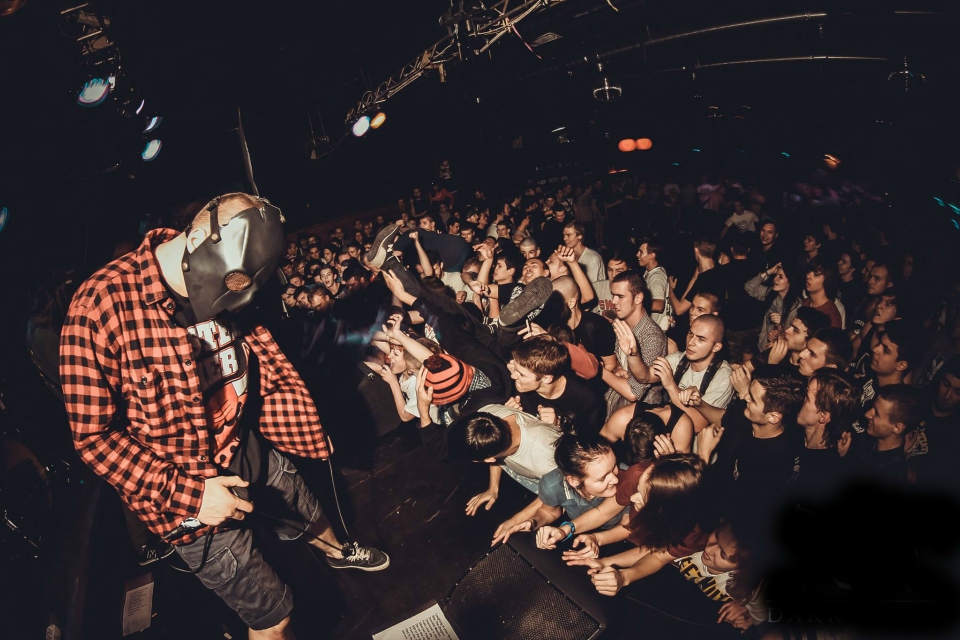 You wear masks on your gigs and in your videos, are you doing this for style reasons or for being anonymous and secure from the russian police and nazis?

In SMG we are doing it mostly because of style. There is a number of factors behind that idea. First of all it allows us to become one with the music we play  and lets us create the ultimate legend of the band and take those who come to our shows to the world of Siberian Meat Grinder with us. We love the doctrine of masked heroes\villains from comic books and the musicians behind masks – from Slipknot to Ghoul and MF Doom. And don’t forget that in our era of total self-exposure and almighty social media, wearing a mask is probably the most original idea to manifest yourself.

From a german point of view it seems that Russia does a rollback to an authoritarian regime with censorship and suppression of minorities like gay or Caucasian people. Is this impression correct or ist this just wrong media coverage?

It’s funny that the media talks about some rollback now, because 5-10 years ago there were much more hate crimes, discrimination and violence in Russia’s everyday life. I don’t even mention the 90’s when the whole country was like a battlefield and ethnic conflicts, Neo-Nazi attacks and crimes against minorities were really huge. But almost nobody – including the Western media, seemed to care about that at those times. There are still enough problems and idiots, but I dare say I see progress and development towards more open and positive society.

I heard you had problems at the european border on your last tour. Was it better for you to travel to europe this time?

The problems pop up from time to time so I can’t remember the certain ones, but in general it’s hard to tour Europe, because as Russian citizens we need visas and obtaining one sometime becomes a real challenge. You need to collect a lot of papers to prove that you’re not a potential immigrant. That’s a shame that in a so called „modern world“ people still don’t have a freedom of movement and some people have privileges based on their place of birth. Anyway I’m far from complaining because there are many places on this planet where people don’t have even the basic rights. In comparison to them we live in a real paradise. 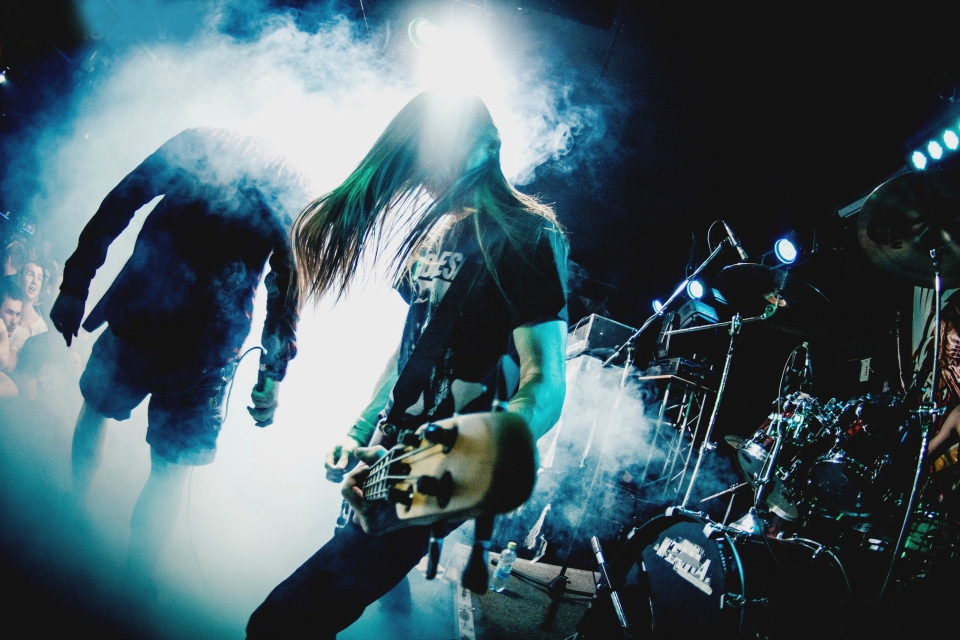 How is your relationship to the russian state?

We only have a relationship to the Siberian Hell where Bear-Tsar rules with the iron paw.

In your opinion: what’s going wrong in Russia today? And if you had the chance to rule the country what would you change?

This is a hard question, considering that we’re a music band  – not a political thinktank. I would prefer if the state made education and medicine more available to people. And also it would be good to cancel a mandatory draft – now you if you are a male, older than 18 years old, you have to spend a year in the army and sometimes it’s pretty hard to avoid it. All in all I dare say that Russian society is becoming more open and tolerant. I remember the late 90-s and even the late 00’s and I can say that life was much harder and there was  much more violence, discrimination and hatred around. So when young kids complain about hard life on the streets I can assure them that even 7-10 years ago they would be instantly beaten to a pulp for their tattoos, hairstyles and band t-shirts by everyone – from redneck youth and Nazi skinheads to cops.

Thanks for the interview!